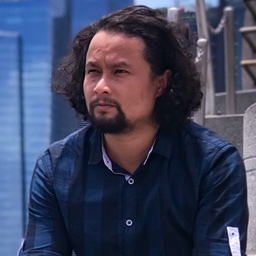 Currently associated with Tatsama Arts as a Founding Member, Shyam Khadka has an expansive experience in performing and cinema art. Khadka started his theatre career as an artist in the year 2005. As a theatre artist at Sarwanam Theatre, he partook in almost two dozens play — most of them in the capacity of lead protagonist. His work in the field of theatre art has also reached beyond the proscenium; he has acted in around twenty street plays, all of them essentially designed for social awareness and change. Few of his acclaimed works include Sakuni Pasaharu, Raktabiz, Natakharu ko Natak, Harekaa Manchhe, Mukti and Kaaya. Through these plays, He has also represented his institutions in various national and international festivals. He holds an intermediate academic degree in music from Lalitkala Campus, Kathmandu. As of now, he has also garnered experiences working as a Production Manager for national and international movies like Ashmina, Kathaputali, Devi, along with other television commercial projects.